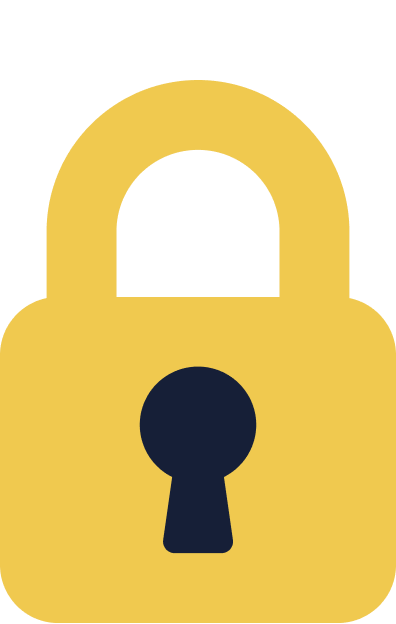 What is vRealize Automation?

vRealize Automation (vRA) is a modern infrastructure automation platform that enables private and multi-cloud environments on VMware Cloud infrastructure. It delivers self-service automation, DevOps for infrastructure, and network automation capabilities to increase business and IT agility, productivity, and efficiency.

What was my role?

I was a Product Design Intern with the vRealize Automation design team to design the notification system for vRA. I followed VMware's design process by conducting the user research and then creating end-to-end stories and high-fidelity prototypes. In each of these stages, I collaborated with designers on my team and other product teams across VMware.

How might we design an effective way of communicating the activity of vRA to the users?

This Toast notification appears on the right-top side of the screen and disappears automatically after a few seconds. This notification contains a small title, a short description, and necessary action buttons informing the users about the activity in vRA.

The user can click on the bell icon in the navigation bar to open the notification panel. This panel contains all types of recent notification the user has received.

Using this page, users customize the notifications to a granular level and opt-in or opt-out of any notification. They also have the ability to add other ways of receiving a notification such as Slack, text, etc.

The current version of vRA (vRealize Automation 8.0+) has areas of improvement in its notification system. All the information from vRA is communicated to the users via Email notifications only. These email notifications are difficult to manage and use because the current system doesn't provide any customization functionality for them. 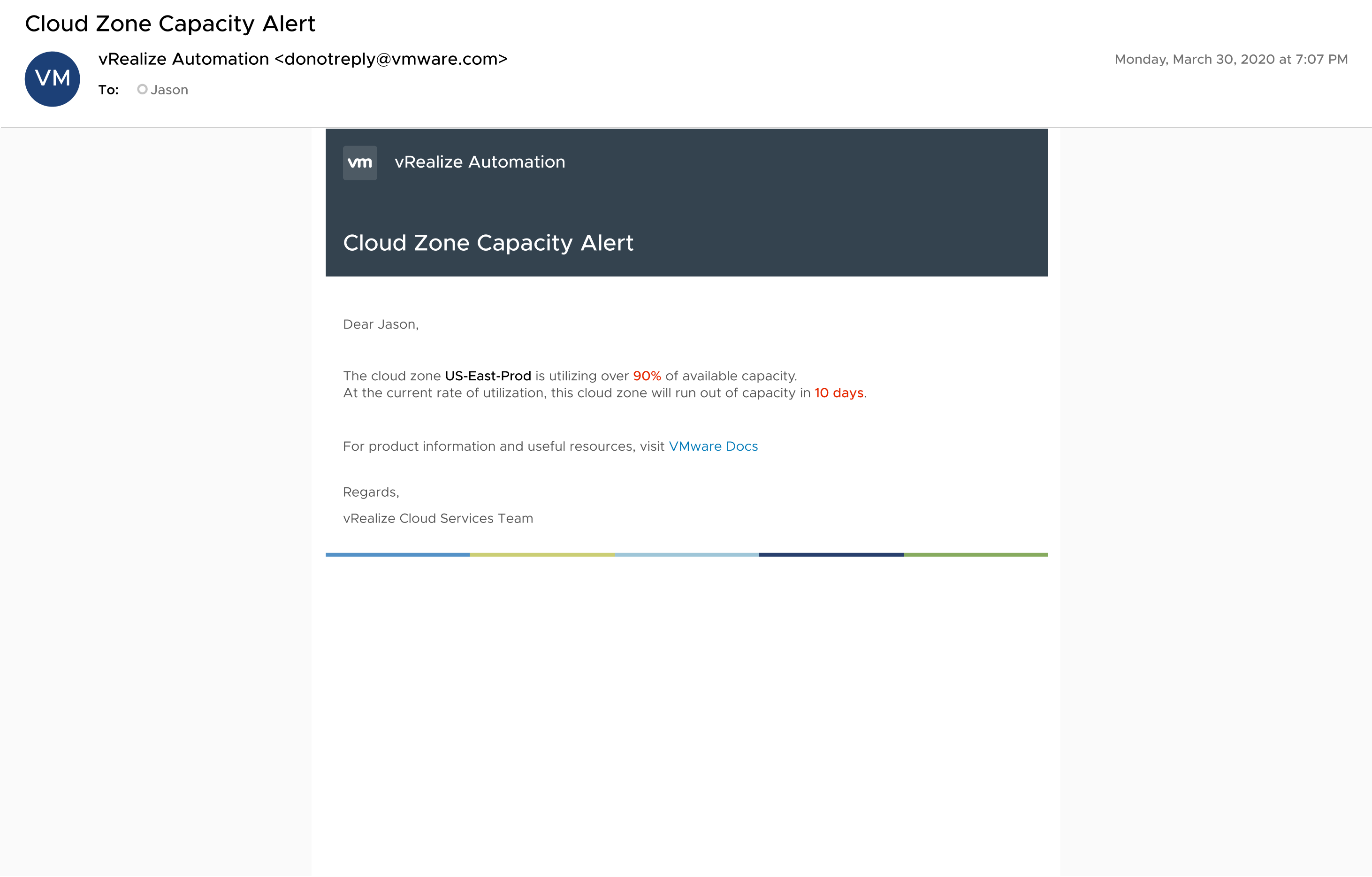 The personas I used are Jason, Shauna, and Scott, who are the primary personas of vRA. These people are Cloud Admins, DevOps SREs, and Developers, respectively. 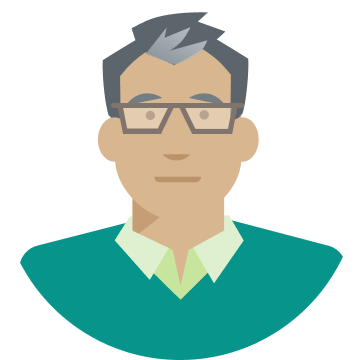 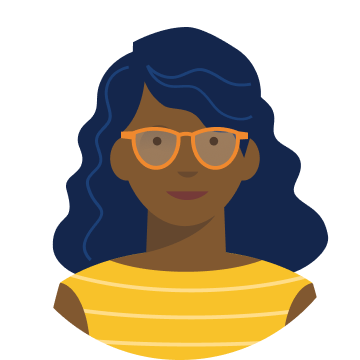 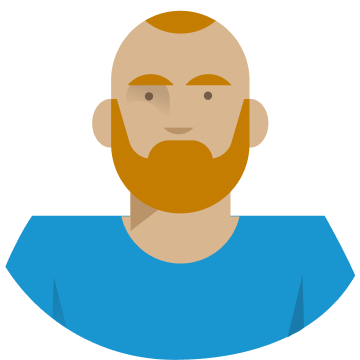 Based on a design partner meeting conducted with 29 customer participants, several user problems and expectations were noted. They are:

I performed a competitive analysis with different VMware products as well as some external products. I collaborated with designers from the Cloud Services Platform (CSP) team, vRealize Operations (vROPS) team, and VMware Cloud on AWS (VMC) team to understand their approach to notifying the users. I learned that most of the use cases they have are very similar to our user requirements. So, I documented the different components of their notification system as shown below. 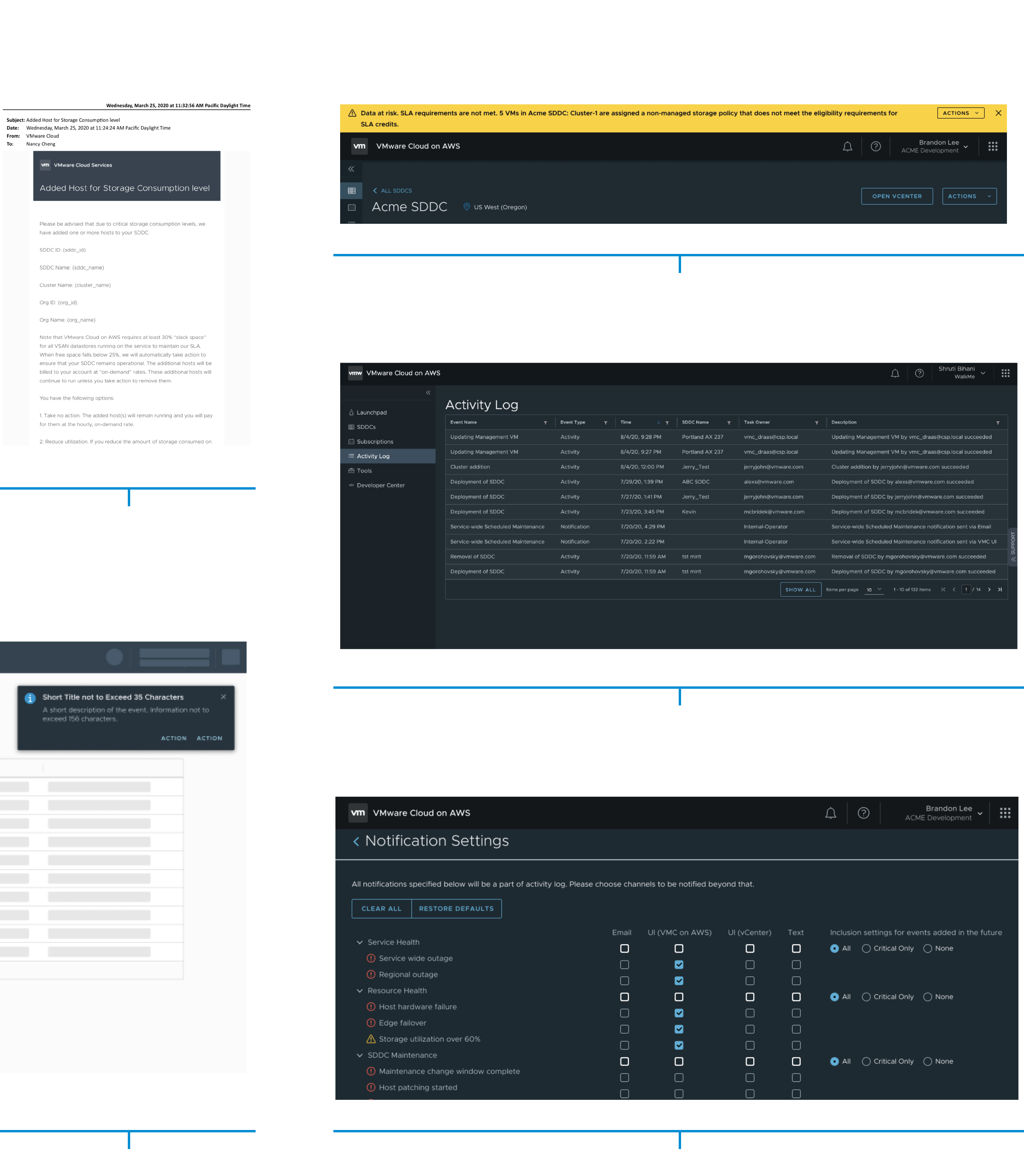 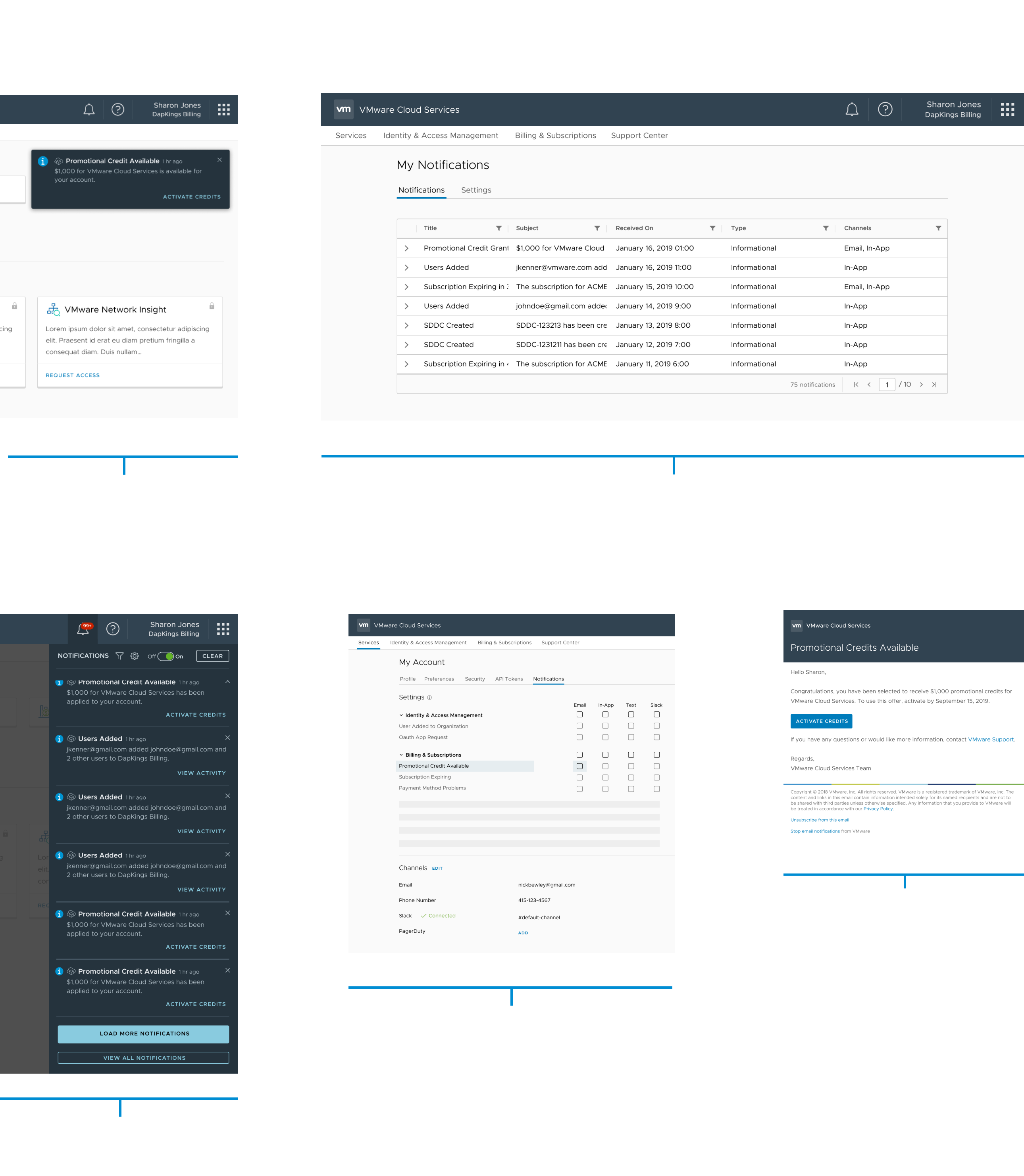 Based on the discussions with other teams and the above findings, I realized that designing a notification system takes multiple components, such as Banners, Alerts, Toasts, etc. Since vRA already uses some of the components, I decided to focus more on Toast notifications, Notification panel, and Notification inbox that I felt would address some of our user problems.

Based on the findings from background research, user research, and competitive analysis, I created the end-to-end story as below.

After creating and presenting the end-to-end story to my team members, I considered the feedback I received and designed low-fidelity prototypes. Considering the time and scope of my internship, my team and I narrowed my project to in-app notification only and excluded the branding and email templates. In low-fidelity prototypes, the main UI components I focused are Toast, Notification panel, and Notification inbox. Since the other teams at VMware were already using these components, my first designs were reusing them to maintain consistency. However, I iterated these designs after several discussions with my team, which are as below.

Based on the discussions with my team, I improved the Toast component by exploring different design systems as below. 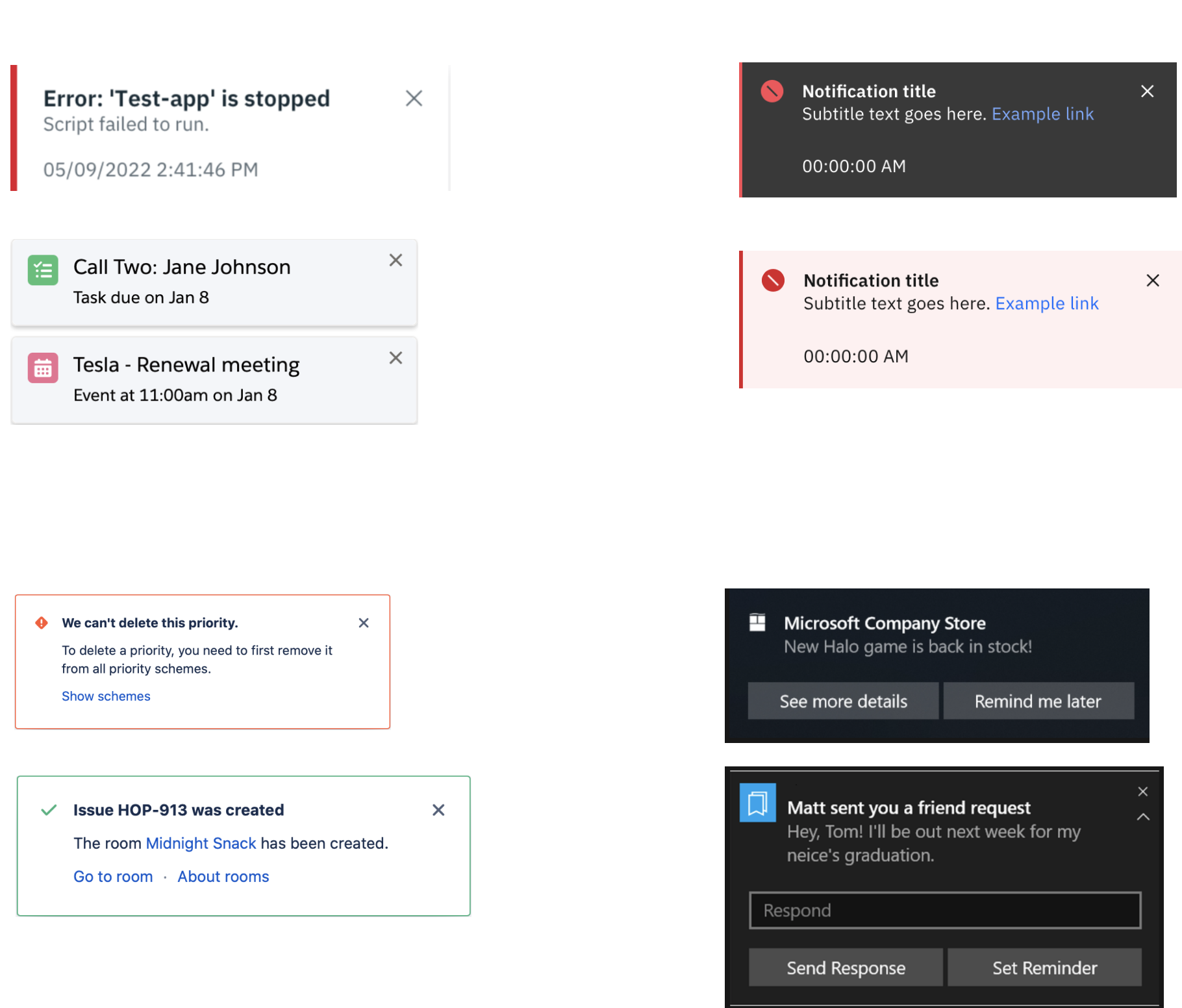 We found that moving the timestamp to the bottom, as shown below, would make it easier for the users to find it.

For the notification inbox, I explored different designs, shown below, instead of going with the table or grid-like design adopted by CSP and VMC teams. 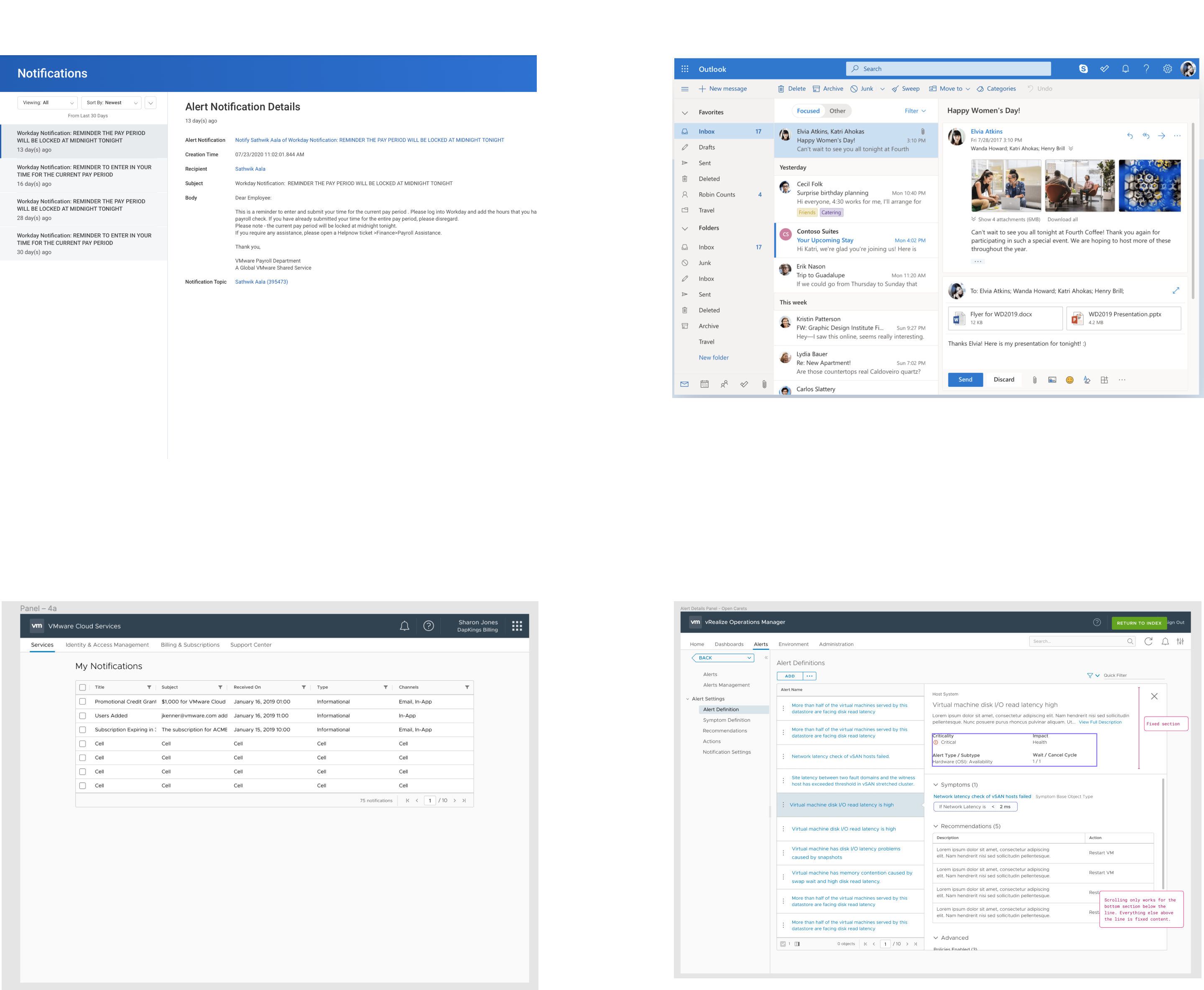 Based on these explorations and discussions with other designers, I learned that having an Outlook like design, shown below, would be better than a grid-like design. 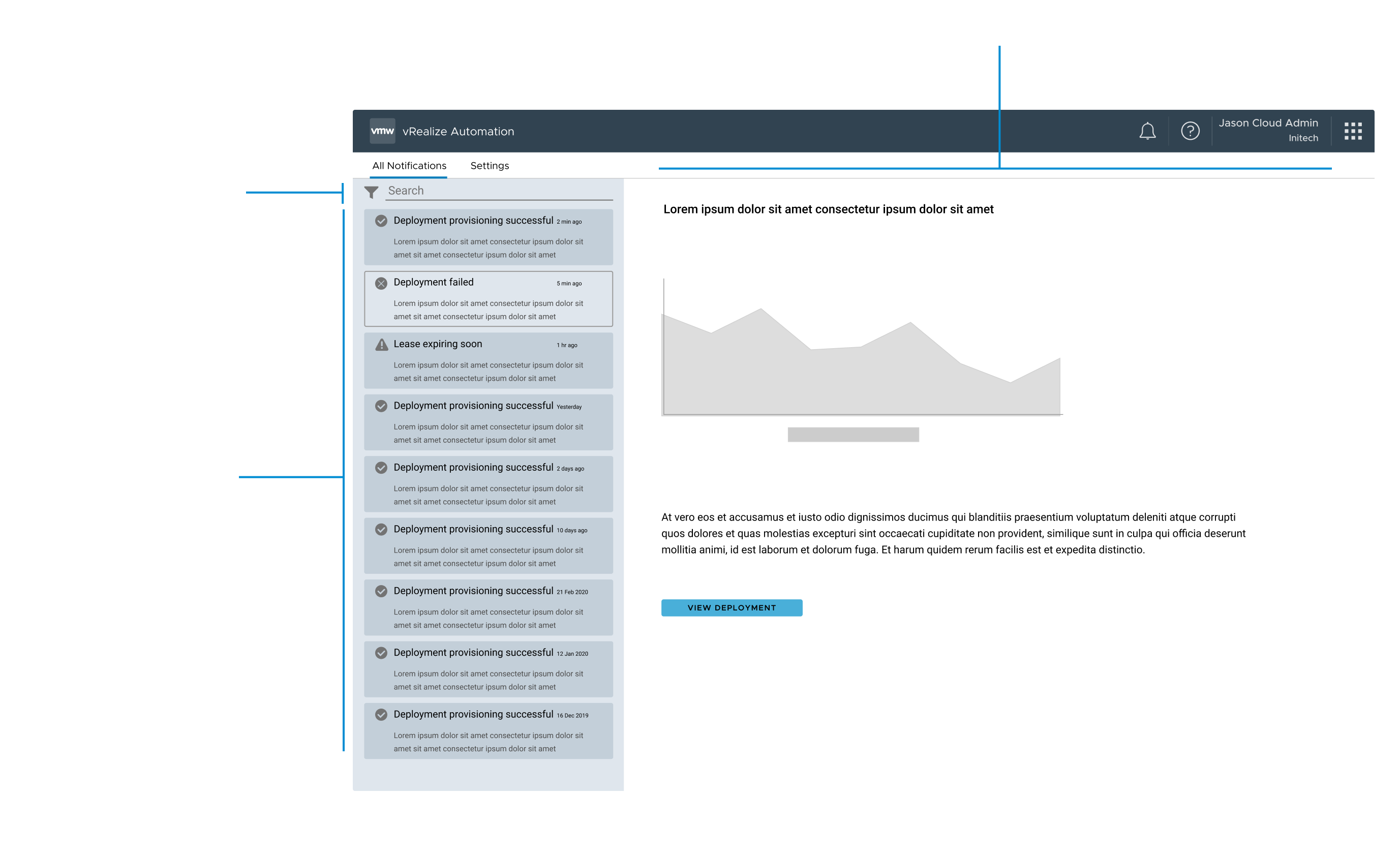 We presented the E2E story and the low-fidelity prototypes to developers. After multiple discussions with them, we narrowed down the Northstar vision and created a Minimum Viable Experience. We considered the technological feasibility, available time and resources, etc. in the narrow-down process. 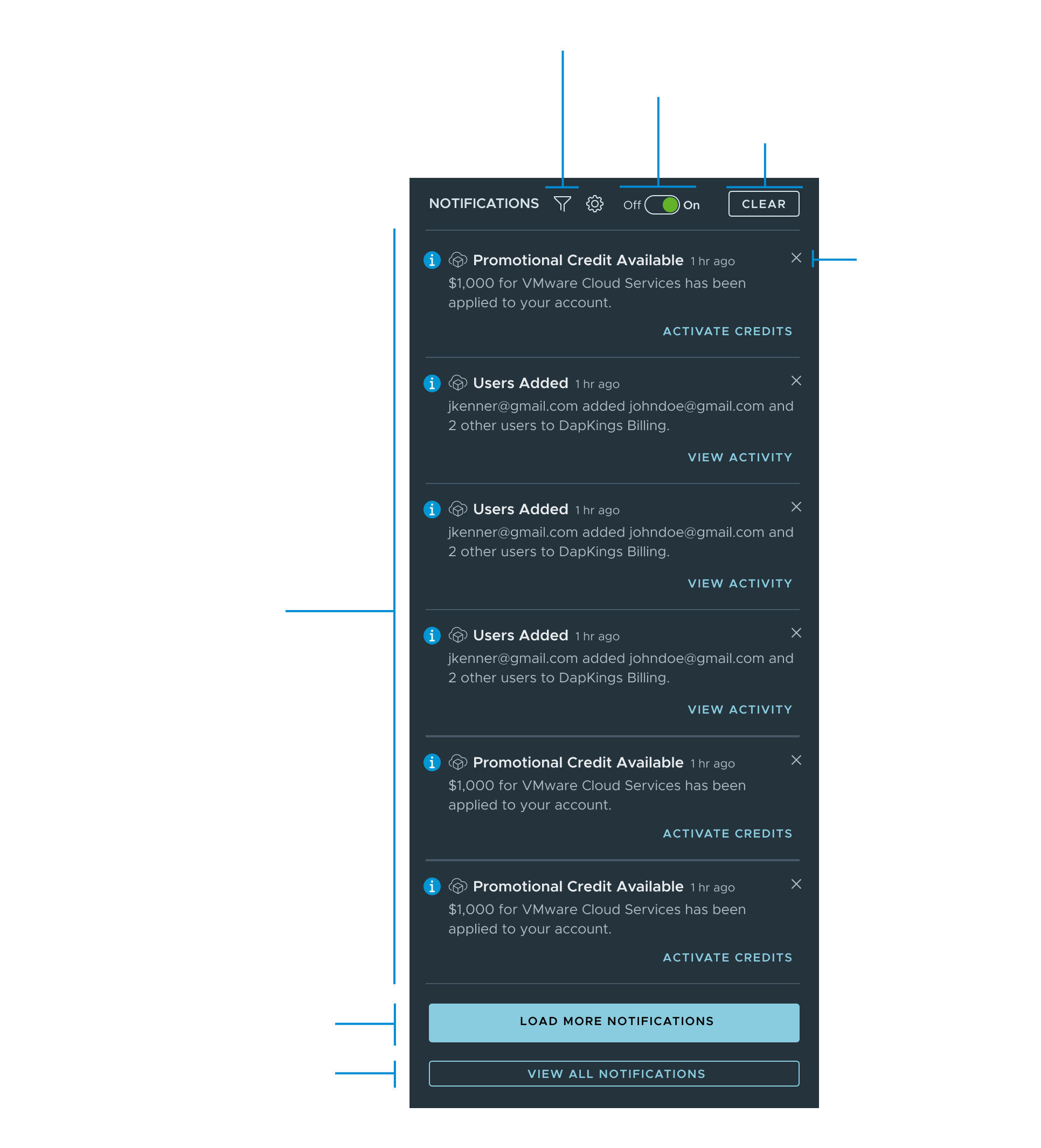 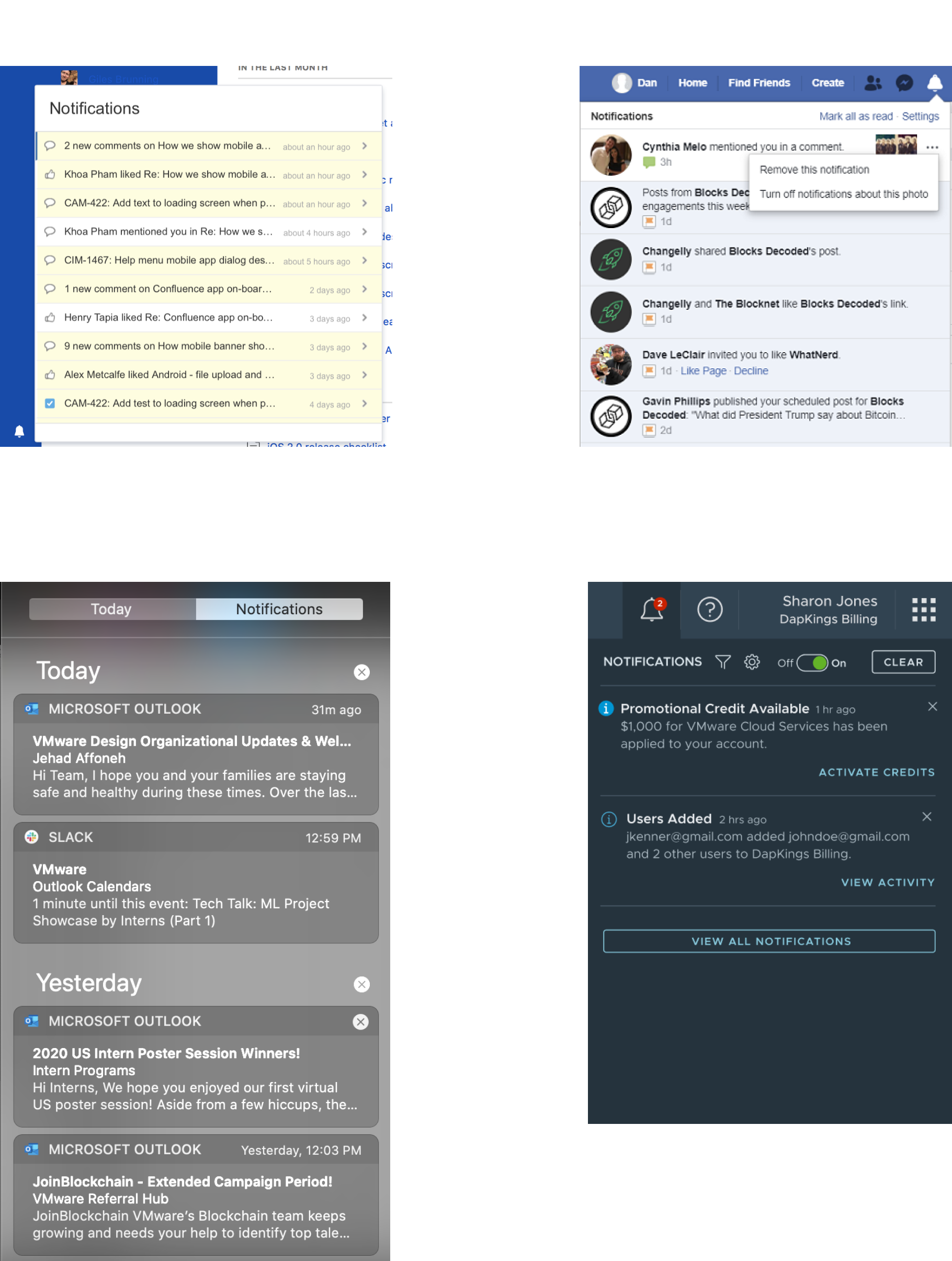 After considering the different options, the final design is as below. 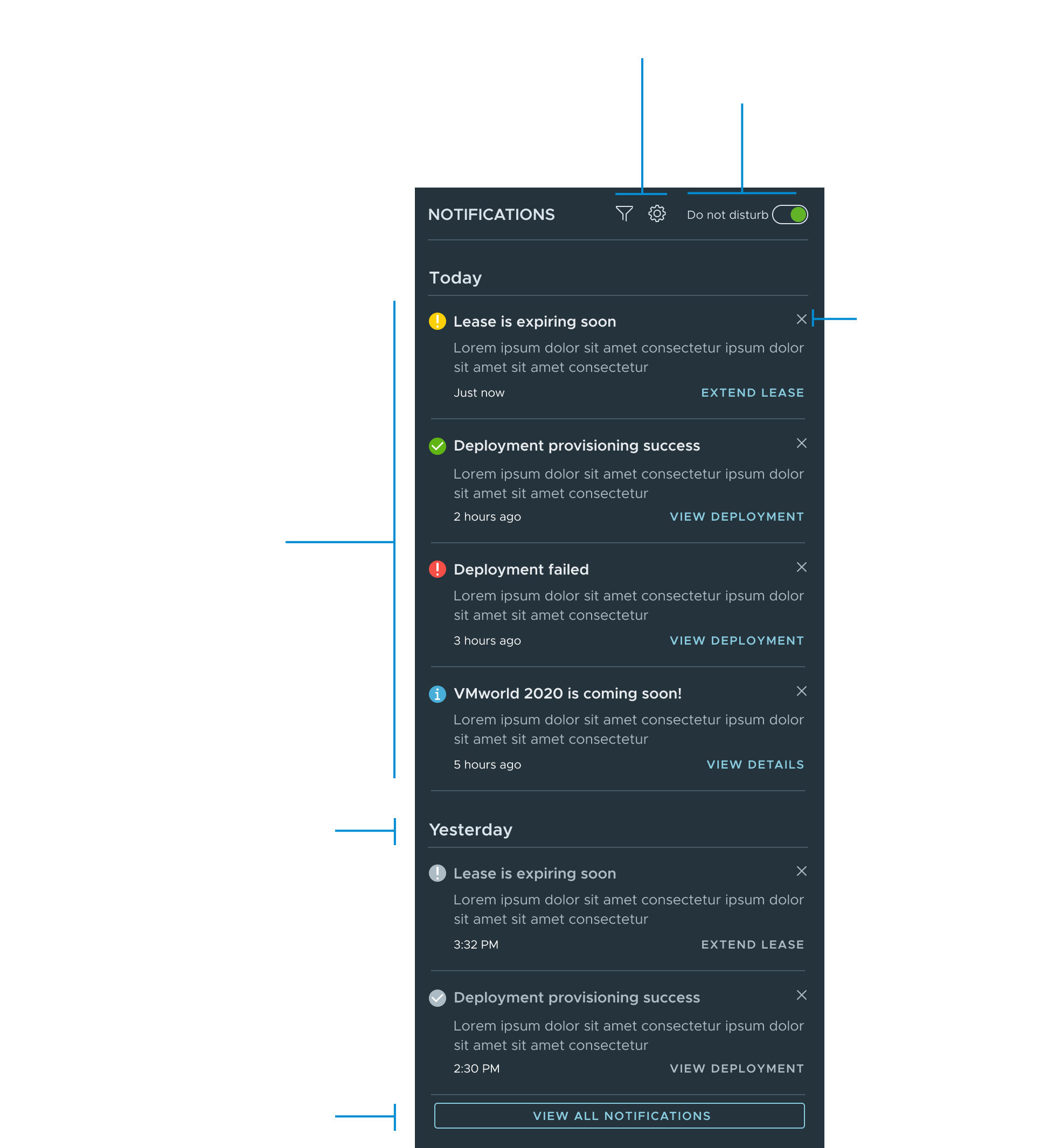 The final high-fidelity prototype for the Minimum Viable Experience is as below.

After finalizing the high-fidelity prototypes and end-to-end story, I presented the work to different managers and designers. After discussing the improved experience, the notification system can bring, the managers have successfully incorporated the project into the product roadmap. I also presented my work to a broader audience by taking part in the VMware intern poster session.

What are the next steps?

Designing the notification system is a massive project, and I couldn't finish the whole thing during my summer internship. The next step of this work would be to test the designs with users and make improvements as needed. We could implement different scenarios such as snoozing a notification, aggregating similar notifications, in addition to the remaining use cases shown in the end-to-end story such as branding and email templating.

The current prototype of the Notification settings page is incomplete, and we as a team determined that the content could only be finalized after understanding different notification scenarios and exploring them on a case by case basis. The level of customization and the different third-party apps (Ex: Slack) connectivity should also be explored.

“I managed Sathwik while he was an intern at VMware. He's an excellent designer, with a solid eye for great experiences. His work has impacted multiple teams across the company and he successfully delivered a solid design for a large and complex project. Notifications at a large scale is a difficult problem to solve, and Sathwik was able to deliver a great proposal and direction on how we can accomplish this. Sathwik works very well cross-team and our entire team enjoyed working with him. I hope to have the opportunity to welcome him back to the VMware when he graduates and highly recommend him for any other company that is looking for an excellent designer to join them.”